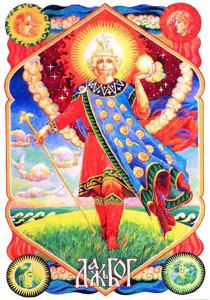 This week I had a couple D words I thought I wanted to write about for the Pagan Blog Project (PBP).
I spent a while researching Didgeridoos, and finally came to the conclusion I was not the right person to tell that story. I love the music and the information was fascinating, but something within me keep niggling at me… when I finally stopped to listen to what was going on in the background, I got the message loud and clear… I just am not supposed to tell the story of the Didgeridoo. Traditionally it is a male instrument and females do not play it… it just feels like I would have been dishonoring something were I to talk at length about it.
So, on to the D word that was actually calling me this whole week, even though I got sidetracked Down Under for a day or so…

In an earlier post I talked about being of Polish ancestry and this week on and off I kept returning to the thought that I wanted to know more about the pre-Christian practices of my ancestors. I found myself looking for anything I could find about the Gods and Goddess that were worshiped, the days that were celebrated, and anything else I could find.
I finally settled on Dadźbóg. After reading much information it became very clear that the gods and goddess of my Polish ancestors were often the same gods and goddesses of other Slavic speaking peoples in the region. There was some regionalization and yet Dadźbóg, was a universal god in that region. There are several pronunciations and spellings for this particular god, which I am not going to go into at this time. I am going to focus on the essence of this particular god; as that is what I feel is important.
Because I’m not a linguist,  I’ve included some information detailing the entomology of this god’s name. 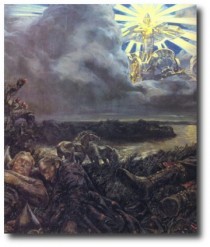 Most scholars agree the root dažd- or daj- is derived from root of the verb dati“to give”. Thus, according to Dubenskij, Ognovskij and Niderle, Dažbog would be “giving god”, “god-giver, “god-donor”. The close related word to slavic Dažd is in Avestian or east-Iranian language – dazdâ, dazda “gifts”.[1] This is particularly interesting since the Proto-Slavic word for god, *bagu (> Common Slavic *bogъ), the suffix of Dažbog’s name, is argued either to be of Iranian origin (being related to Indo-Iranian etymons such as Old Persian baga, Sanskrit bhaga), or being semantically influenced by Iranian source, both being ultimately derived from PIE root *bʰag-, whose reflexes in both Slavic and Indo-Iranian came to mean both “deity” and “wealth, share”.[2] Thus, translated literally, Dažbog would be “giver of fortune”. This echoes the ancient Indo-European concept that deity is, in essence, an entity which gives wealth and abundance, an indication, perhaps, that Dažbog is a relic from common Proto-Indo-European religion, or even that this was not a name for any particular Slavic god, but a general epithet of a deity. (Dažbog) 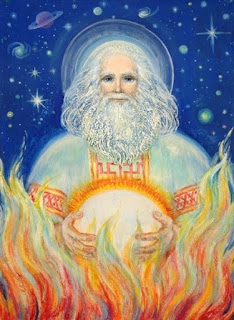 The idea, expressed above, indicates this particular god may not be an individual god, but instead may be a conceptualized understanding of deity in general, which feels right to me.
The story of Dadźbóg, is often associated with wolves and sometimes is referred to as the lame shepard of wolves. He is also thought to be a Sun god who rises in the East as a golden infant who travels through his twelve kingdoms ( possibly the signs of the zodiac) in his chariot pulled by either three or twelve horses (depending on the legend),  he ultimately dies at the end of the day as an old man. Many of the stories I found on the internet shared similarities, but the details were sometimes different. This is common when trying to resurrect the old stories or reconstruct the old practices of most pre-Christian religions.
Rather than regurgitate the information I found about this god, I have shared the information I thought was the most insightful for me. I have also decided to take the time to get to know this god and other gods and goddesses from this particular region. I really appreciate the work that went into the sites I reviewed to find out more about the Polish pantheon and Dadźbóg, in particular, but I know the information is primarily derived from stores or accounts, told by outsiders. Often when another culture tells the stories of another cultures deities and spiritual practices, the stories get distorted and often are told in an unforgiving or incomplete light.
I encourage you to take the time to read the information provided at the websites below. These are probably pretty good basic legends and a great place to get started on my path to knowing these deities and possibly building relationship with them.
References:
beling.net.17 02 2012 http://beling.net/articles/about/Da%C5%BEbog
Care erau zeii slavilor? 17 02 2012 http://www.frontpress.ro/?p=21443
Dazbog. 13 02 2012 http://www.fact-index.com/d/da/dazbog.html
Dažbog. 15 02 2012 http://en.wikipedia.org/wiki/Da%C5%BEbog
Deities of pre-Christian Poland. 16 02 2012 http://sourceryforge.org/index.php/Polish_Pantheon
Polish Paganism. 12 02 2012 http://polishtoledo.com/pagan/index.htm
Slavic Deities and The Unclean Force. 16 02 2012 http://www.slavpaganism.com/#!__deities/a—da
SLAVIC GODS. 17 02 2012 http://slavialand.org/slavicgods.htm
Slavic Myth and Religion. 14 02 2012 http://www.winterscapes.com/slavic.htm
Slavic mythology. 17 02 2012 http://en.wikipedia.org/wiki/Slavic_mythology

Have a Wicked Good Day!
Molly