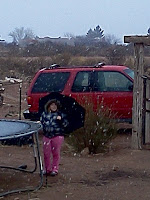 This year the Vernal Equinox or Spring Equinox as most of us know it is marked on most calendars for today (3/20/12). It happened to be at its apex in AZ (where I live) at 10:14pm yesterday (3/19/12) this year.
Because of the time difference caused by the time zones, I started my Spring celebrations yesterday and carried them over to today. Yesterday was an interesting start to Spring for us here in Southeastern AZ, we had a really good snow storm that lasted most of the day and into the evening, covering the local mountain ranges, (The Huachuca Mtns, The Mule Mtns, and the San Jose Mtns) it even flurried in the River valley (San Pedro) where I live.
Normally we do not have snow this late in the year and this year is a surprise because it has been such an exceptionally mild winter. I’ve been out in the yard in my shorts and T-shirt a few days this month.
My nine year old daughter, Jolene, and I started our Spring celebrations by coloring eggs. By the time we had our eggs dyed, the snow was coming down pretty good and my oldest Son (Albert) showed up with my his daughter (Leilani), who is also my oldest grandchild. We watched the snow fall and talked about going to play in the snow in the mountains. When Chris (Fiancé) and Travis (youngest son) got home from work we did decide to head up to the Mtns to play in the snow. After bundling up and deciding on which canyon to go up, we headed out.
As we got closer to the mountains I started to feel the Magick. I can’t describe it any other way. I know it is a local Mtn deity, and this deity is sometimes male and other times female. I am not sure if this is a pair or if this is one deity.
I hadn’t felt this particular entity in six years; I haven’t felt any divine energy in five. I’ve been plugging along and trying to get through my daily life knowing that at some point I will reconnect with some form of divinity.
Yesterday marked the sixth year since I had felt the connection with the Mtn deity. Six years ago I was in some turmoil over a Magick Shop I owned. I had started this shop online and had built it up for several years. In 2004 I opened a physical location for the shop and in 2005 took on some business partners. A lot of things went on within the business until the spring of 2006. At this time it was clear to me the partnership needed to dissolve and that meant I would be handing over my business to my partner. It was a difficult decision, but one I finalized at the community Equinox Celebration in the Huachuca Mtns.
One of the local covens was conducting the ceremony and many others were in attendance for the ritual. A friend and I chose to support the ritual by climbing up the canyon wall and drumming for the duration of the ritual. The whole time we drummed the snow fell thicker and faster. This would be the last time I participated in the general pagan community in my area.
When we arrived in the canyon yesterday, I could feel the energy of the area, it was almost palatable.
Right way I took Leilani and Jolene over to the circle. I was surprised and pleased to see that someone had been using the fire pit and I saw that two of the directional markers as well as the sun and moon rocks were still in place. I felt as if I had come home. After the guys all showed up in the ceremony area, they started snow ball fighting and just having a really good time.
I didn’t cast the circle, nor did we have ritual there, but we did have great family time and I was so pleased to share this sacred place with Jolene and Leilani for the first time. I did leave a small offering of hair pulled from the nape of my neck in one of the trees.

Today I looked out at the mountains and could feel them again as I did yesterday. It’s like this separation from divinity has been ended. It ended at spring equinox six years ago during a snow storm and was renewed yesterday during a snow storm. I am looking forward to building my relationship with the Mtn. deity, whoever she/he/they may be.

After Jolene hunted and found all our colored eggs, many of them with magickal symbols drawn on them, we used them in our Equinox ceremony. After smudging our altar and each other Jolene and I placed  Blue for water in the west, green for earth was in the north, yellow for air was in the east, and pink was in the south for fire. I know fire isn’t pink, but it is as close as we could get with spring colors. We also placed the green egg marked for the green man on the right and the pink egg marked for the goddess on the left.  I’ve never really included a male deity in my workings, and since this is a time of balance, I made this the first time to include him, with the intention to make a connection with the male aspects of deity.
We blessed her candy rabbit (white chocolate) and a glass of milk for the goddess and a cup of coffee for the Greenman. We chose coffee for the Greenman in honor of my fiancé, the green man of our family. He loves his coffee!
After this was done we took the drinks outside to our outdoor circle and sprinkled them all around the parameter. At each of the four directional markers we left an offering of a fresh egg, and in the center we left a huge carrot for the birds and animals who might want it… We also gave our horse Bubba carrots along with his breakfast. He was really surprised, but gladly ate them right up.
This year we baking sweet egg bread. I’ll let you know how it turns out in another post. 😉
I hope your celebration was as special as ours was.

Have a Wicked Good Day!
Molly