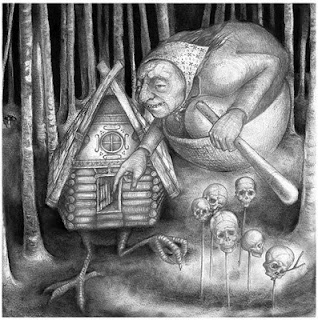 I was first exposed to Baba Yaga as a somewhat watered down character in the story of Hansel and Gretel. The next time I found myself face to face with the Baba Yaga was while going through a divorce. I had decided it was time to remove myself from a marriage that had nothing to do with me. I had no idea who I was, and happened to come across a book titled, Women Who RunWith the Wolves, written by Clarissa Pinkola Estes, Ph.D.
I immediately resonated with the author and found the stories she retold to speak to me in a much deeper way than I had ever expected. The first point of resonance for me was that this woman is Polish and Hispanic. I am Polish on my mother’s side and had been married into a Hispanic family for 13 years. I was able to identify with the feeling of cultural confusion and then personal emptiness.
As a young person I was raised with every derogatory comment or joke being told around me, focused towards “Pollocks”… I learned that part of who I am is stupid, bumbling, foolish, and someone to be disrespected. As a young adult, married into a Hispanic family I learned “my place”… women were to serve, you were expected to be “fiery”, and yet you better shut the hell up and do what is expected. The role of woman in this culture was confusing to me, especially since it was the women who treated me the worst.  I had no idea who I was or what I was doing here on this planet.
While reading Women Who run with the Wolves, I found the story of Vasalisa and the Baba Yaga.  I have read this story over and over many times. Each time I read the story or see images of Baba Yaga, I immediately remember being really small and going to my mother’s grandmother’s house to visit. When we got there Busha (Grandmother in Americanized Polish pronounced BOO-shah) would be there at the table. She was old… I mean OLD… she looked like the witch in the fairy tales my dad would read to me at night.
She always wore a heavy black dress, with heavy grandma shoes. To top things off she was always wearing a babushka (scarf tied on her head, it is actually a Russian word for grandmother).  Looking back at my memories of Busha, she definitely could have been Baba Yaga, flying through the air in her mortar, using a pestle as a rudder and dragging a broom behind her to sweep up and move the clouds.
The story of Baba Yaga is a story that reflects the transition from naivety or innocent youth to the wise crone. Now that I am a grandmother and moving towards menopause, I am struggling with the identity of the old woman… I don’t want to be the scary, witch figure, Busha represented to me as a child.
The common story girls and women are raised on in today’s world is a story of beautiful, slender, youth ruling and being the desired prize of men and is in direct conflict with our image of a wizened up old woman who is ugly, fat/thin, dependent, and mean; something to be cast aside like yesterdays wilted and rotten dinner salad. The Baba Yaga challenges us to look deeper at ourselves as women.
I originally was going to tell the story of Baba Yaga for this post, but instead, I decided to tell the story of how she has influenced my life, through my Busha, who incidentally, happened to be a witch. My mother will never admit her grandmother was anything but Catholic, but the stories Mom tells of Busha’s “wives tales”, tells me Busha was a wise woman. she made a huge impression on me and has returned to me in the story of Baba Yaga.
I encourage you to read Women Who Run With the Wolves. You can also read an excellent essay on Baba Yaga at http://www.mythinglinks.org/BabaYaga.html  and you can find more info by checking out the links in the text.
Have a Wicked Good Day!
Molly